The Treasure Coast has always attracted seasonal residents from the Midwest and northern states. But lately, a different type of buyer has started to purchase vacation and retirement homes in Martin, St. Lucie and Indian River counties.

“We’re only going to live here six months of the year,” said Fran Stewart, a Canadian citizen who bought a single-family home in Hobe Sound last month. “We spent three years touring Mexico for property but we decided on buying here. Real estate there is very complicated to buy.”

Fran and her husband, Greg Stewart, purchased the home through Janet McCullough, a Realtor with Prudential Florida Realty, which carries listings from the tri-county region. “It was one of the best-kept secrets for so long, but the Treasure Coast has been discovered,” she said.

McCullough is taking several Certified International Property Specialist (CIPS) courses to specialize in selling to international buyers. And that forward way of thinking might help boost her sales in the future.
International property buyers have started snapping up properties across the Treasure Coast and they’re using local Realtors to help them find their dream homes. Buyers say favorable currency exchange rates and attractive prices have made the Treasure Coast and Florida their top pick. The phenomenon is not unique to the Treasure Coast and is probably one of the few bright spots in Florida’s housing market.

From May 2007 to May 2008, the top three states for completed international residential transactions were Florida, California and Arizona, according to a new study from the National Association of Realtors. Florida had 25.4 percent of the foreign buyers nationwide with California coming in second with 8.9 percent and Arizona with 8.7 percent.

Local Realtors are now taking advantage of the region’s favorable weather and image abroad to boost stagnant home sales. “We’ve represented several Canadian buyers over the past year,” said Sally Daley, broker and owner of Daly and Co. Realty, which has listings across the Treasure Coast. “We’ve been attuned to opportunities to represent Canadian buyers for over the past year when the Canadian dollar reached parity with our currency.”

Earlier this month, Daley showed several Vero Beach homes to German couple René and Kirsten Jurk. At the same time, Daley’s most recent Canadian clients, Bonnie and Harry Morrison, were putting the finishing touches on their new home they bought last May in Vero Beach.

“Over the years, we had gone to the Gulf Coast and after that I told myself I would never come back to Florida again,” said Bonnie Morrison. “Then we had a couple of friends talk about it here. We came reluctantly to visit and just loved it.” Morrison was also pleased to have RBC Bank, which has several branches on the Treasure Coast, in her backyard. 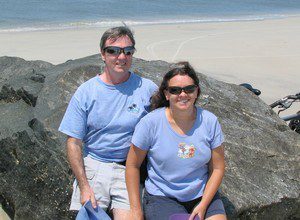